Parallel thirds start in violins I & II and then move to viola and cello. The music modulates from F major to D minor abruptly via the dominant of the new key. To recreate this procedure: 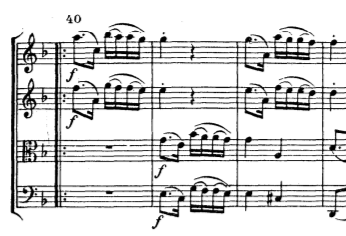 This modulation uses first unison and then parallel thirds to modulate from F major (the dominant of the Bb tonic from the end of the exposition) to C minor (the relative minor of the subdominant).

To recreate this effect.

This is as simple as it is bold! Beethoven modulates from C major to the unrelated key of A major simply by repeating the last six bars of the codetta at the beginning of the development in the new key. Needs a strong and emphatic idea and plenty of bravado!

Haydn moves to the relative minor at the beginning of the development with a modulating version of the opening theme. He moves from a root position tonic chord in the old key to a diminished seventh that resolves onto the new key. To replicate this progression do the following.

NOTE: dim 7 needs to be a semitone below the tonic chord of the relative minor

Mozart does the same dominant to relative minor progression as Haydn in the previous example but he adapts his codetta theme rather than his opening idea. What helps this idea work is the chromatic rise in the bass from G to G# to A.

NOTE: dim 7 needs to be a semitone below the tonic chord of the relative minor